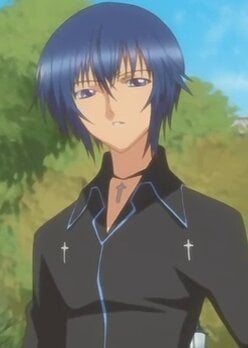 Ikuto Tsukiyomi is a brooding, but mature and independant young man who works for Easter and is charged with helping them to locate the embryo. He has a penchant for the unexpected and an ability to play the violin - something he generally does in private. His brooding nature makes it difficult for him to grow close to others, but his natural magnetism freuqently draws people in.

I used to have a massive crush on this guy when I was a kid...then I rewatched the series/reread the manga during Quarantine and realized he a whole pedo so yeah um not that much into him as I was when I was younger lmao, other than that his character is pretty cool if you take out the whole pedophile part. Gotta say tho, yes I understand we wanna save our childhoods but people in denial of his R.Kelly self and making excuses gotta be real with themselves, the man's a whole predator lmao.

Ikuto has always been one of my favorite characters by far from the manga series all the way to the anime series. Yes I can understand why so many people don't like him because he's a 17 year old high school boy who flirts with a 12 year old girl, but that's all he does is tease and flirt. He has never taken it to a very inappropriate stage and even directly says to Amu for her to be a few years older. Even the scene were Ikuto doesn't give her a proper kiss. All of his interactions with not just Amu but all the other characters as well are my favorite to watch. He's just an all out teasing boy who just loves to tease anyone and everyone just like a cat!!!

I understand why people dislike him, but watching this as a child I was in love with this dude. And it never really went away XD.