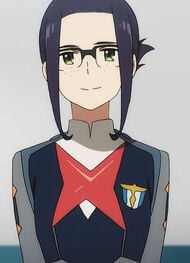 Best character in Darling in the frnanxx <3

Easily the worst member of the main cast. Really wish there was more to her character other than just being a lesbian, but she contributed nothing. She had 2 minutes of relevance throughout the entire series in the generally agreed upon worst section of the show's runtime. Even Naomi who was only around for about 2 episodes had more of an influence than her.

ngl shes pretty irrelevant, the only reason people like her is because shes a lesbian

I am sad because she is into women and i am man.