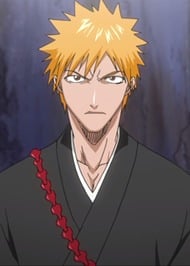 Ichigo is a tough high school student who has gained the various abilities of a shinigami. He is incredibly powerful, though the source of his sheer strength is somewhat of a mystery. He tends to delve into fights with his ‘attack first, think later’ attitude and though he has always had a tough guy image, Ichigo is exceptionally protective of those close to him, and will always risk his life to save them. Ichigo’s sword, Zangetsu, is different from most other zanpakutou in that not only does it lack a hilt, but also it constantly exists in its released state.

Overrated :( Worst mc in the big 3

Yo what's with all the hate here?! And I thought Ichigo was hard to hate damn...

why you guys hate him so much, he doesn't deserve all of that hate

I Hate this goddamn son of a b*tch.

He died a couple of times! Seriously, I just want him dead.

He's a SUBSTITUTE soul reaper whom is suppose to worry about the world of the living above all else, also he defeats the KENPACHI something two captains couldn't even do. Got his ass HANDED to him by Grimmjow yet of course defeats him in Hueco Mundo, not to mention he also died TWICE against Ulquiorra. Seriously I know it's a work of fiction but god damn, every other anime has the bringing back the dead is forbidden once they are gone they're gone for good. Not Ichigo, I got sick of hearing the bullshit that spewed out his mouth 95% of the time, them two freaking words, "I gotta save them, I gotta protect everyone" like dude no you don't they're CAPTAINS. Bleach tried TOO hard to make Ichigo the strongest, everyone should know Ichigo didn't even have to blink to miss his death against Byakuya. It happened so quick yet what happens? DEFEATED. Get his ass handed to him for half an episode flashbacks appear and all of a sudden it's the protagonist winning the battle. They put in some great captains as well, but lets face it nobody can compare to a Hollow Soul Reaper and part Quincy lmfao...

" + "Must save Nakama" resolve = Victory