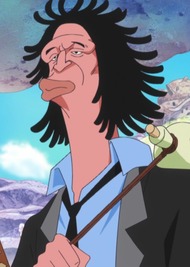 Known as the "Drunken Assassin", Hyouzou is the strongest swordsman on Fishman Island. Though a member of the New Fishman Pirates, his primary motivation is money rather than the destruction and subjugation of humans. Despite his strength in battle, Hyouzou is relatively laid back and enjoys nothing more than a relaxing drink; though he does have a habit of attacking anyone on sight, be they allies or enemies, when drunk.