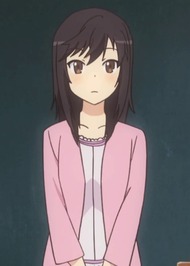 Hotaru is my favorite character of the series. Not because of her... figure, though. I just always liked shy girls in manga and anime (Like Nodoka in Negima or Shinobu in Love Hina) And while Hotaru isn't as shy as the two I used as example, she's still adorable. Plus, her voice actress has a soothing voice (at least when she's not panicking). I also love how she quickly change between her mature and (very) childish demeanor on a whim, depending on the situation, that adds even more cuteness, and hilariously clashes with her, errm, ''mature''  physical appearance.

I dunno why people are against the Lesbian tag, though. She may be very young, and the anime was pretty vague on the matter, but in the manga, she's confirmed to have romantic feelings toward Komari by chapter 3. (During the same scene in the Anime, she just interally state how cute Komari is)

They went a bit overboard there with her... measurements O_O

I'm with flybynight, I think 5th grade is a little early to be called a lesbian for having a non-romantic crush on another girl. She doesn't have an older sister so the fact that a slightly older and cute girl has befriended her is probably pretty exciting. Little kids look up to teens. She's probably 10 or 11 and the fact that a teenager is spending time with her is cool for her.