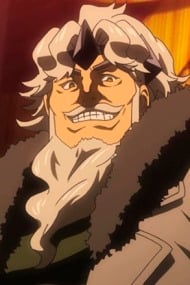 I like his death in the manga more better than the anime because he suffered through all of the people's wrath, while caving his face in, in the anime was satisfying, but not as much as his manga one. And I wish I was in that line because he is responsible for millions of deaths, and for killing most of Night Raid.

Even Homelander would not stomach this idiot

There was nothing interesting about this villain at all. He was a pretty generic villain with no personality.

He is by far the worst character in this terrible anime.

he's a fat cut in my opinion