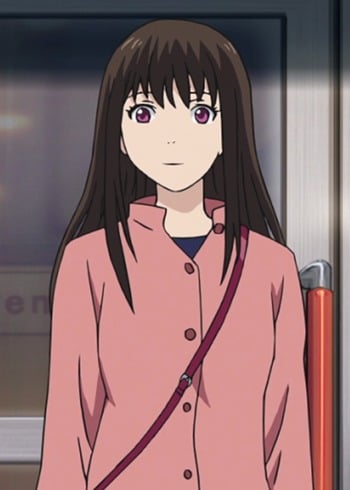 By Yato how can someone's voice be this irritating ? Either the sound team needs need to turn down her levels or this bit needs to get a sore throat... I've never had to turn down my Tv for one god damn character.

SPOLERS (can't get the spoiler tags to work) SPOILERS

I actually like yato x hitori but the way they portrayed hiyori's realization of her feelings was bleugh for me. Girl was so dense she needed Kazuma to use his regalia invocations stuff to make her realize. I'm beginning to question why I liked them together. Or maybe I just thought I could insert myself in their world through Hiyori lmao.

Aww I think she’s an angel

I initially really liked her. She was essentric, a closet martial arts fan, worshipped Tono (the martial artist) as a god, problematic (when she tried to find Yato a Regalia and fails due to her lack of knowledge and endangers the two of them, it was fun), and willing to fight. Then she stopped fighting when she found out her cord is her lifeline (the fact she kicked a giant frog and attempted to save someone from a truck without thought should imply a risk to her life isn’t enough to deter her, but it was). It was a bit silly she could use martial arts in spirit form just from being a fan, but this became even stupider when it was never brought up ever again. Tono also takes a huge backseat once Yato comes into her life (the god in her life was replaced so easily). Her personality is reduced to “nice female tsundere love interest fan service character” almost immediately after her debut. The show began to drag after episode four for me, the main reason being her screen time. It just felt like her bland personality consumed the show. The plot of the show relied on her support (and the interactions in the show also relied on her). She controlled the story while also not directly contributing to it (finding people/ talking to the other characters to make them realize the error of their ways/ saving the other two main characters by finding people and talking to them to make them realize the error of their ways). She has a tail, is tsundere, is helpful, nice, brave, and saved everyone what a good character. What happened to her flaws? She has a good setup as a martial arts fan who gains increased physical abilities when she leaves her body, leading to fun body dropping instances and a fun fight scene, but the setup is abandoned. She didn’t have to have a spirit leaving body condition if she wasn’t going to use it for anything. The condition only serves as an excuse to why she’s hanging around Yato as time goes on. The concept was abandoned after it achieved the effect is was going for, and now she just has a tail sometimes.

And thus, this ends my paragraph about how I dislike zhiyori/ how I wish Hiyori fought more (instead of bs super smell, they could have given her more bs super strength. Or maybe have her continue to jump into battle without thought and cause trouble. Or maybe make it so she could half turn into a weapon because she was half dead (sounds dumb but super smell isn’t that much better). Just anything other than “I need to go get another character” or “I need to talk so the audience knows what to think” or “nose ex machine” or “I sure do love Yato” or “baka time to beat you up for being a hentai”—)

(She was really getting on my nerves, so I typed all this out. Now I realized I spent 20 minutes rambling about how I don’t like a fictional character and yadi yadi ya. Reminder to future self; don’t waste time on characters you don’t like; the more time you waste on them the more they win—)