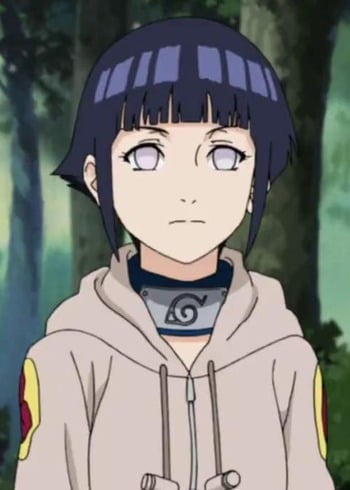 Hinata is the quiet heiress to the Hyuuga clan. Though she is not the strongest of ninja and constantly lives in the shadow of her cousin, Neji, she tries her hardest during missions. She is able to use Byakugan – the genetic trait of the Hyuuga family, which allows her to see chakra. She is extremely shy, especially around Naruto whom she has a crush on.

Easily one of the worst written females I've ever come across.

At least Sakura was entertaining to watch.

Continuing off of what the last reviewer said, it's sexist too because it's basing a female character's worth off of what men find appealing- e.g. a kind, submissive waifu who will always love you- (the same goes with judging a girl's worh by her breast size- all you pervs saying Sakura (or any other character) is flat like that's something to be ashamed of lmao) rather than her worth as an actual person/character.

@inactive Said all that I wanted to say. Hinata is a terrible character just like Sakura, but because Hinata is nicer and a typical weaboo's fantasy waifu people defend the obvious flaws of her character. Again, the issues with this character has been said before so I won't go on a long rant, but all I'm gonna say is that people need to stop giving bad female characters a pass if they're kind/attractive/submissive waifus that'll always love you. People do this for Rem and Orihime as well and it's annoying as well as somewhat sexist because it implies that bad female characters are only something to be criticized when they're rude and more bold.

If you hate Sakura for being useless then you better hate Hinata more. All she did was protect Naruto.