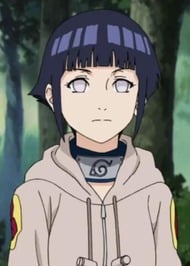 Hinata is the quiet heiress to the Hyuuga clan. Though she is not the strongest of ninja and constantly lives in the shadow of her cousin, Neji, she tries her hardest during missions. She is able to use Byakugan – the genetic trait of the Hyuuga family, which allows her to see chakra. She is extremely shy, especially around Naruto whom she has a crush on.

So, lots of people keep putting hate on Hinata because she doesn't have notable "character developement" - it is because Hinata isn't the main focus of the anime - the anime puts its main focus on Team 7 and revovlves around them, with a few snippets from Naruto's close friends, which means Hinata has less appearance in both the manga and anime - unless the missions require quite a few people. Though, in my opinion, Hinata, too has come a long way - she saved Naruto TWICE when he needed it the most and she has lots of potential that usually gets lost in the crowd. After so many years later, now, Hinata is the wife of Naruto Uzumaki and mother of his children, someone she really admired from her childhood.

I am not a part of the fanbase of any Naruto characters but I have to admit that while Hinata's character is not flawless - it is also not completely unbearable. There are lots of people who are shy but still sweet. I think that's why many like Hinata - because of her pure nature and tend hate Sakura who poured hate on Naruto constantly and didn't acknowledge him - even if subconsciously.

That's purely my opinion and so, no hate.

Also I can't like her character due to the fanbase acting like she's a god and saying Sakura is trash because I don't wanna be seen as a part of that "fanbase".

Tbh I'm ok with her but Sakura is better than her IMO. Everyone says Sakura always whines "Sasuke-kun" but this girl does the exact same thing but instead she does it to Naruto and she actually does it more than Sakura. Istg people who act like this girl is a God or something and act like Sakura is a piece of garbage have NOT watched Naruto. How do I know? Because I was THE EXACT SAME WAY BEFORE I ACTUALLY WATCHED IT! So PLEASE, before you start trash talking Sakura and worshipping Hinata watch the freaking show first.

She's a stalker idk why people like her. Neiji died because of her the only reason she haves fans is because of her chest and the useless trashcan haters