Aka: Terror of Death 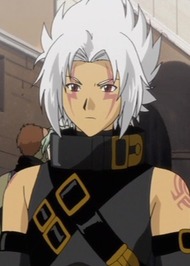 My Blorbo. I wanna cover him in milk and throw him at a wall. Love him in Roots, in the games, in the novels. Even in the trilogy movie, which I found meh at best, I loved him. Blorbino

His Characterization in the GU Games is pretty great, Too Bad ROOTS only showcases his eventual descent into power seeking vegeance. Though granted ROOTS is a prologue that should have been an OVA for the games.

He is a guy who barely registers on a heart monitor.  He is so flat, dull, boring, and emotionally devoid that when he later turns into an evil mindless monster, it is actually ironically an improvement to his character.  The only thing he has going for him is that he is slightly less boring than the lead character from Hack:\\Sign.  This is mostly wasted since he spends so much time looking like a disinterested clueless dimwit who can only mimic a parrot everytime someone addresses him by repeating what they said as if he was to stupid to understand the simple words or question to begin with.