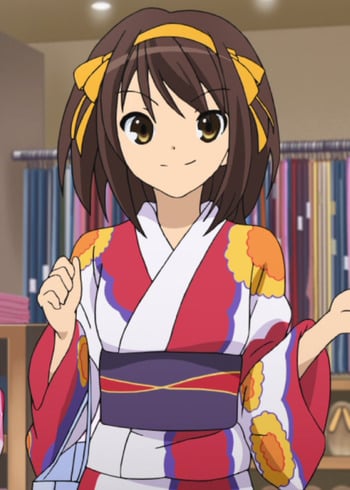 Eccentric, adventurous, and arrogant, the SOS Brigade President views nearly all other fellow humans with disdain and is only interested in the new, mysterious, or out-of-the-ordinary. Her impatience, exceptional talent, and considerable beauty drive her to quit every club she joins and end every relationship she enters--but not out of malice. The restless girl merely spends each and every minute seeking to wring adventure and excitement from her life and can't be bothered with anything that stands in the way of that goal.

Right - I want to like her but the way she treats her friends like slaves and only her wishes matters made me think again. I don't hate her but don't like her anymore as I thought she would improve as story evolved but nope.

I hate to admit it, but she's an iconic anime character, even though I didn't know anything about her. Only ever seen her around until I picked up the anime. If you guys actually support a character who pushes her friend onto a man against her will, then use said friend to get her way by "blackmailing", please get professional help. She also abuses her friend to wear revealing clothes and forces her to change against her own will when her male friend was in the same room. Not only is she an absolute toxic and harassing friend, but she's also annoying too. Y'all are probably the same people who get mad when a woman falsely accuses a man of sexual harassment, but you support this character???? are you insane??? and she comes off as spoiled to me. forcing her friends to do whatever she wants them to do to benefit her. one of the many examples, making them work PART TIME in ugly animal costumes just so she could keep one of them. She's too sheltered and rude, and the rudeness doesn't even amplify her character's personality or anything. It leaves a bitter taste. The whole time loop thing pisses me off too because she caused it with her magical powers about how the whole world is suddenly centred around her. She doesn't even know her friends are suffering in an infinite time loop while she has fun doing whatever she wants. Completely ignorant. And they can't even tell her. Imagine suffering through a bunch of time loops over 15 thousand times just because a teenage brat couldn't open her mouth to say that she's not satisfied yet even after all the things that SHE planned. Yeah, the moment I found out, I'd literally attack the living daylights out of her. The dude literally had to play a guessing game to figure out what she even wanted to do. And imo, she's not even pretty, the show keeps on pushing the fact that she's hot/cute but really weird at the same time. wow, so quirky!1!!!!!1

Tldr: she can go back to hell.

My goddess! I addore you Haruhi and would kiss your feet!