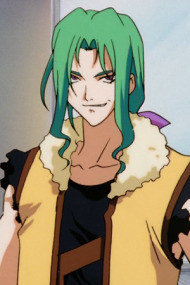 A tragic character. When he first appeared in front of Melfina he gave off huge domestic-abuse type red flags, but by the end of the series, I did really like him. Even though he was in the wrong in a lot of ways, he was still learning how to behave, and he did genuinely love Melfina.

This dude was such a creepy-ass, "nice guy" INCEL if I ever freaking saw one in an anime. He's the type of dude who would bring you a bouquet of flowers and (aggressively) shower you with compliments, but if you politely decline his advances and decide to set some boundaries, he'll freak out and call you a bitch for rejecting him.

harry's the only character in this series who isn't a one-dimensional archetype waifu or tsundere catgirl shrieking NYANIIII every other scene, and the only character that actually has some sort of realistic character arc, and he's downvoted to the floor... SMH.... femmies always gonna hate