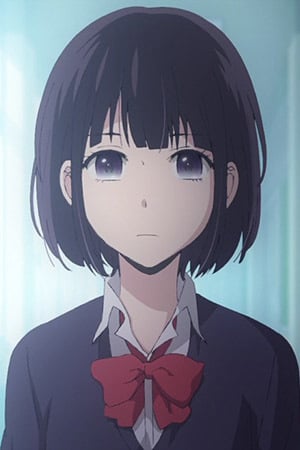 She literally is one of my favorite characters. I knew I loved her immediately after she ran Noriko off. She wasn't a pushover or dandere or any nonsense like that.

She realized she couldnt be like Akane and after a failed attempt she realized she didnt even want to be like Akane. Hell, Akane doesn't want to be like Akane. She understood exactly why she was doing the things she did, no matter how terrible, and I can always appreciate someone like that. I also know what kind of depression that kind of self understanding brings, but she chose that depression rather than lie to herself like the other characters. In the end, that kind of honesty is why I knew she would find real happiness. And not the kind of 'happiness' bullcrap Narumi is settling for.

I understood a lot of her decisions, not all, but most. I found myself yelling at the screen a lot during this show and as if she could hear me... she didnt disappoint. If she were a real person I'd probably like her a lot.

Hmm... Maybe should give bisexual tag?