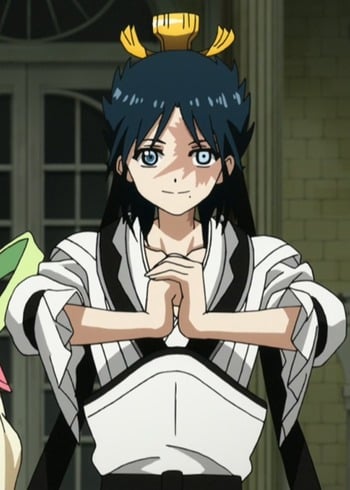 Epimondas, Hakuryuu contributed plenty to the battle. He employed magoi manipulation to defeat enemies alongside Morgiana and rescued her when she was injured. He also lost a limb in an attempt to protect an ally. He was certainly worthy of the Djinn considering everybody present other than him already possessed one. On a secondary note, it is likely Hakuryuu has post-traumatic stress disorder, as he fits every symptom to a significant extent. This condition can be considered a mental disability if severe enough --- I state this as somebody with it. It is entirely valid for him to behave immaturely and brutally as a result of it if my theory is accurate. In any case, I adore Hakuryuu. I disliked him before, but I do not feel it was warranted. He is one of the most intricate and realistic characters in the franchise, and his development truly differentiated him from others. Some people do not recover from or manage their illnesses, and he exemplifies this fact.

We must protect this emo baby at all costs><!!!

Idk just protect him everyone

its not that i hate him cus he worked with the mains BUT HE TRIED TO RUIN MY SHIP OF ALIBABA AND MORGIANA- UNFORGIVABLE, KILL HIM