Although she is not the brightest in the classroom, Hakufu has a talent when it comes to fighting. Despite squaring up to some serious opponents, she doesn't fight for power. Instead, Hakufu has fun testing herself and pushing her skills to the limit. Trained by Master Chouchou, she has developed an uncanny ability to read her opponents chi. Although Hakufu is a respected and feared fighter, she has a kind heart and would do anything to protect her closest friends and family. Living alone with her mother, she has to endure the older women flirting with her school friends! 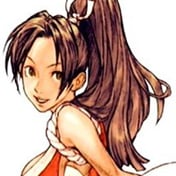