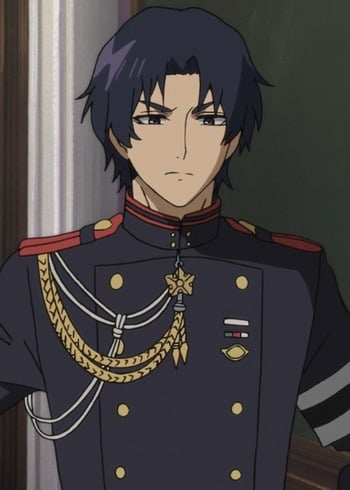 as much as I hate to say this... I really dislike this man.

I read the manga, hate him a lot

I really hate him. When he slicks his air back it looks really stupid, but more importantly what he did in chapters 89 and 90 of the manga. In a lot of cases you shouldn't hate a character for killing another character, but Guren goes off and on. Seraph of the end is very confusing when it comes to trying to understand who is the villain. Guren has done many things, but the worst thing he's done in my eyes is what he did to Mikaela in chapters 89 and 90. Other than assisting in bringing on the apocalypse, which can be even seen as honourable because it was to bring back his friends, except not really because in turn it ended the lives of millions of innocent people who never even saw it coming.

He does what needs to be done to keep humanity continue living their life amidst a vampire apocalypse, and for that I respect him.

I also like his funny rivalry with Yuichiro, baka!