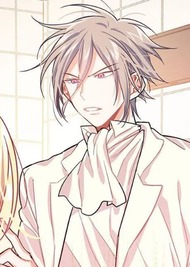 if linden didnt exist, i think greyham and elise would've been a really good pair- like dam is this what second lead syndrome is? oh yeah it totally is as I find myself quite sad that they didn't end up together (I pity all of the 2nd male leads of every story..) he had such great development too, watching elise grow and understanding her talent and genuinely respecting and supporting her for the longest time, he really looked up to her, it breaks my heart he got friend zoned hard. whats worse is how he was written out of the story like they sort of dropped this character altogether he became such a minor character :( like they wrote out his development and feelings towards elise </3 he wanted to confess but ended up not doing it bec he knew she didn't love him and after that well the story gave up on him and made him accept it without ever really finishing his character development.. what I'm trying to say is its frustrating how after he accepted it nothing between him and elise's development ever happens (as the story focuses on elise and linden) like he never tells her and the story casts away his feelings and essentially gives up on him- sigh, this is what second lead syndrome is, pitying the second leads because they deserved better. in no means is this a hate comment towards elise and linden, in fact, I really love them together! i just wish Mr greyham got more screen time and more development instead of making him irrelevant ;3;