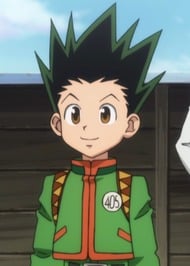 Living alone with his aunt Mito, Gon is an adventurous young boy who is intrigued by his mysterious father. Holding onto a lone picture of his dad, Gon one day dreams of following in his footsteps to become a world famous hunter. Always cheerful and upbeat, he seems to completely lack a negative side and pushes his friends to be as successful as he is.

tbh he's the best shounen MC ever written. setup from even the first few arcs pays off in later arcs. there's a lot to his character that people write off because the series doesn't handhold the viewer and explain it to them directly but rather expects the viewer to reflect on the information presented. one thing I really appreciate about him is that he isn't always right. there's a lot of MCs who power through everything with an utmost sense of justice, but it makes sense gon doesn't have a fully formed sense of justice or view on the world given his young age and his abandonment issues/way he's tried to make sense of the world around him. gon is good.

I'm personally not a fan of Gon but he does have his moments.

There's just something about this character that allows me connecting with him in a meaningful way, I'm not entirely sure I can explain it. I think he is a awesome character exactly; he's just kind of 'different from others' for me. But really, the only character I genuinely like in this series along Kurapika and Killua. Maybe Kite a bit.

I hate Gon Freecss, because he has high emotional complexity of complete levels, with complex attitudes and actions, high emotional imbalance, very immature, high euphoric and impulsive, high optimism in certain situations for the wrong reasons, very antipathetic in other occasions, weak psychology , and owns low self worth, and even though he likes his friends a lot, he never showed high levels of empathy, never showed much attention for others, etc.

And all of this means that he will never be able to reach the full percentage of his complete development. Even though he is a great character, he will never be a much better character than characters from American fictions and anime. And as he is very optimistic, antipathy and much less realistic, he can never deal with rejections, loneliness, misfits, etc. And that will never make him a much better person than others.

The reason a lot of people and I hate this character is not because he's boring and annoying and stuff. And yes because he has huge disadvantages about himself and for everything I've said. In addition, he is an anime character, that is, a fictional Japanese character with surreal behaviors. Because even if he only had real behaviors compared to real humans and didn't have those big disadvantages that I said anymore, it's obvious that he wouldn't be the same anymore and would be quite different. That's all i say.