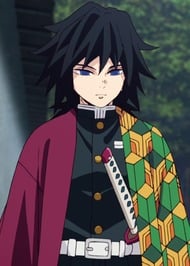 I actually really like Giyuu. He's cool and actually pretty funny. I actually love his relationship with Shinobu.

The Levi of the series.

Not exactly, did you read up on the explanation on what happened during that exam? Far from natural selection if you only survived after nearly getting killed by an even weaker demon only because your friend saved you. In this particular case it was the stronger one who died after trying to carry the entire class only for the game to end on him. It's a little wonder why Giyu would have survivor's guilt but in the end one has to trudge forward which is what Sabito would have wanted him to do.

I wish he'd get over his self-loathing and survivors guilt about Sabito. It's tragic but also natural selection, you were stronger, that's why you survived.