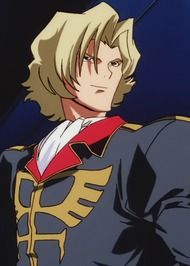 mean, yeah. The Apsaras was the one thing that couldn't abandon him after Aina ditched him, so of course he'd take drastic measures to protect it. BPD be that way, abandonment issues and all.

Btw wow have things changed in the 10 years(wtf) since I last posted here. Folks let's just say if a character you really relate to probably has a certain mental illness, you probably do as well.

Which is why I'm still here stanning my favorite underrated messy Gundam twink.

He is a well crafted tragic character even though towards the end he went completely off the deep end and he lost all touch with sanity. It is not hard to sympathize with him to an extent yet he still does have an ice-blooded side and did not hesitate to eliminate any perceived threats to his ambitions.

Chars is not reasonable. He picked sides without having respectable reasons. Life is too easy for him. To be honest, nearly all of ova characters are much much better than 79 characters.

Ghinius is severly mentally ill, as in he probably didn't even fully understand what he was doing by the end of the series. I felt plenty sorry for him. Hell, to me he was the most sympathetic character in the show. Char, on the other hand, is a vengeful douche who knew damn well what he was doing and more than enjoyed doing it. Lest we forget he pretended to be Garma's best friend for years just so he could stab him in the back AND LAUGH ABOUT IT. Not to mention Kishiria, and his general callousness towards people. And of course CCA where he, you know, wanted to drop an asteroid on the Earth and kill billions of people. Yeah.

Sure Ghinius is no saint, but the stuff he pulled is nothing compaired to Char. Just because Char's a cool ace pilot or a complex character doesn't mean he's any less of a monster than the less shiny cool villains.

And honestly, I don't completely blame Ghinius for trying to get in the way of his sister running off with some enemy soilder she's known what, 12 hours? Yeah he was overly clingy to her, but I don't think that's something he can really help (we know by the end he has severe abandonment issues thanks to mom walking out, not to mention IMHO he's a textbook case of Borderline personality disorder. Niether are things he asked for, can control, or deserved). Codependancy =/= evil, and that's the worst I see in his relationship with Aina pre-breakdown.