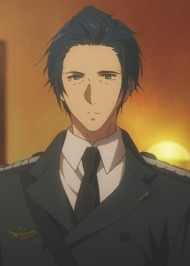 Look, Gilbert and Violet were never family, they were comrades. Violet was only meant to be a weapon for him, and they were never sexual with each other. Then Violet grows up and I believe she romanticized everything in her head and obsessed over him, like just being in close proximity to Gilbert made her lose her mind. It was so painful to watch because I feel very similarly to my ex (who's 30, I was 17) and even though the relationship was unhealthy and abusive, I still love him to death and it feels like a part of me is missing without him. So yeah, I really relate to and feel for Violet, I was definitely crying throughout the movie.

I believe Gilbert and Violet deserve each other. They've both been through similar experiences, they're both heavily attached to each other, and they're both unable to move on or forget about each other. Violet would've never been able to find happiness without Gilbert, she would've been tormented for her entire life because she was so dependent on Gilbert. So yeah, Violet is a woman now and she can be sexual with a comrade she was really close to, it's not a big deal and he isn't like a father to her.

Another point I'd like to bring up is that this is anime, it is a cartoon. It's not real and it's nothing to really get worked up over, although it was romanticized and glorified, the narrative was also obvious about how unhealthy their relationship was. As long as people know it's not okay to have these kinds of relationships in real life, it's fine. Kind of like how people know not to murder people despite watching murderers in TV films or movies. It's common sense.

love him, he had a kind heart and it was obvious they had a familial bond

It's pretty obvious that they have a Father-Daughter relationship. But I guess everyone has their own view. Honestly you could even look past all the Familial/Romantic stuff and just see it as them having great devotion towards one another.