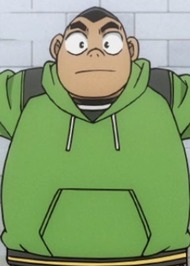 Genta is a rather large and kind young boy who attends Teitan Elementary who is good friends with Ayumi, Mitsuhiko and Conan. Genta is quite loud and likes to take charge and despite being the least sharp of the three, he is the self-proclaimed leader of the Detective Boys. Genta loves food, particularly eel on rice, and is always thinking about his stomach. He has a crush on Ayumi and sees Conan as a rival for her affections.

I skip every episode that has this kid in it. Literally, worst character in the series by a thousand miles.

1000 eps and not a bit of character development

I think I never hated a character as much as I despise this brainless kid. Literally brainless and runs into trouble while dragging others with him. With all honesty, I don't understand his whole purpose in the course of the anime/manga.

Ayumi and Mitsuhiko at least are balanced in the sense of behaving according to their age. They often show remorse for breaking the rules or doing something they should not. But this damn kid... He seriously destroys sometimes the whole Detective Conan feeling for me. I would love to see him gone from the whole series, like transfer schools or something, seriously.

I HATE this kid. He's very disrespecful, selfish, only thinks about food, egotistic and is plain stupid. He constantly just brainlessly storms into places as if they were his own house touching and using everything, including other people's houses (people he doesn't even know) and even criminal's bases. Because of this, he's almost gotten himself and his friends killed countless times and were saved by Conan. Once he even got Conan shot and Conan almost died, but did he repent from this? No way in hell. And every time he acuses Conan of claiming all the credit for himself when in reality it's the complete opposite, Conan is always giving everyone credit they don't even deserve. This goes to the others as well but just because thanks to Conan they solved a few cases he thinks he's a great detective now and can do great things. He's the definition of the Dunning-Kruger effect, plus he only wants to be praised and find a treasure to buy Unaju (people might find his constant mention of Unaju funny but I think it's annoying as hell) and he doesn't even know what shame is because he just asks anyone to give him anything he wants