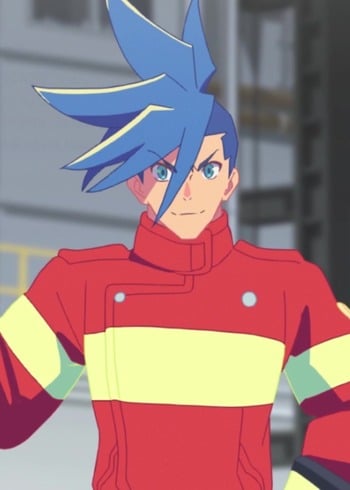 *takes a hit of the blunt*
What if Kamina were a firefighter?

My favorite moron.  Promare would be nothing without him and his goodness.

I though his cringy factors were actully very charming.

Underrated boi because he isn't a pretty boy, fire powers, or coolness factor. I feel bad for poor Galo since everyone ignores him in favor of Lio since everyone views Galo as nothing more than a "dumb, stupid himbo" who is a "Kamina rip-off" and a "generic shonen protagonist" with no depth, substance, or character development. Also I don't understand how anyone can find Galo "boring", like bruh...what movie did you watch? The fact he starts out blindly idolizing Kray Foresight, the actual main villain of the story and then crumbles down and CRIES after finding out the cold, hard truth? The fact he gets locked in a cell for a week to be executed and succumbing to despair after seeing how his idol betrayed him? That's not development?!

Also debunking the "Galo is just an idiot" myth, THAT'S NOT TRUE. If he really was that much of an idiot, then he wouldn't be able to handle himself well against the Mad Burnish(even though they were holding back). Also since when was an idiot smart enough to learn to cool his head because he's considerate of other people's feelings and how they would react if he lost his temper right there? So no, Galo is not "just an idiot" if he has that amount of emotional intelligence. He apologized right after unwittingly dehumanizing Lio's people and felt Lio was crying during the latter's rampage. That's right! He FELT Lio was crying rather than SAW. Plus he sensed Lio's hesitance to use his flames after finding out his powers came from aliens and gave him a pep talk to cheer him up.