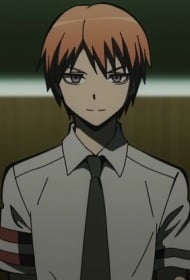 I know he's karma's any relative..

And tell me who could be cute as him

Yeah sure, he was a total bitch when he was first introduced, but later on the show (especially in season 2) he would disagree with his father's ways and strove to be better than him. He was fully aware of how much of a tyrant his father was and how he cruelly treated not just the E class but the entire school when things didn't go his way.

In the end, he stood up against his father and tried to become a better person towards the end of the show, and for that reason I won't hate him.