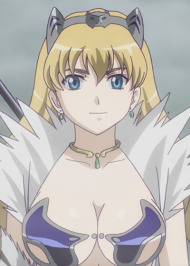 Such an annoying and insufferable character, literally nothing likeable about her and not only wasn't needed in the series but the series would've been improved if her character was not included; her sister complex gets irritating very quickly, especially since even if you ignore the incest (ew) Leina isn't an interesting character so it doesn't make sense for Elina to have such a boner for her and would've made more sense for her to have a weird step-sister complex to Claudette (still ew) who is an actually eye-catching character in terms of personality, development, and looks.

I’ve heard of the Oedipus complex,but Elina has something else.

I’ve always thought the Oedipus complex theory was one of the most misguided parts of  Freud’s psychoanalytic theories,but Elina proves him right.Although Freud’s theory of the Oedipus complex involves a child and their parent of the opposite sex,there must be a term describing Elina’s “Fixation” with her sister. It’s as if they feel like they  have to put some incest in these anime.It’s disgusting.People who like this kind of thing are PERVERTS.