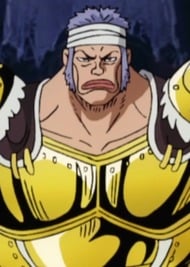 Don Krieg is infamously known as the most powerful pirate in the East Blue. He is captain to a massive crew and huge arsenal of weapons. He wears solid and impenetrable armour and not only wields weapons such as a giant spear that explodes upon impact, but also a shield with the capability to emit bombs filled with poisonous gas. He has little sense of gratitude and only sees his crew as a means to achieve his goals.