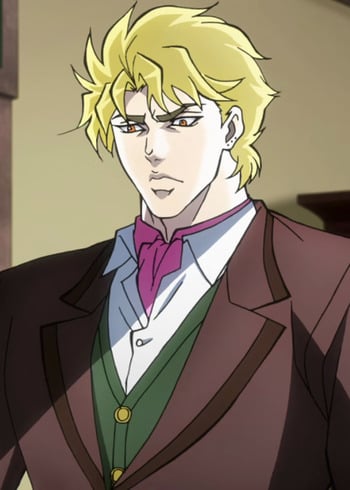 A really great villain, I'm pretty sure you rate hate or love based on if they have a good design/are made well but I prefer to rate if I personally hate them. However this is my place to openly curse a guy out, ok here it goes, THIS [email protected]#$%!& I SWEAR TO GOD HE GETS ME SOGODAMNED ANGRY WITH HIS WANTING TO BE THE BEST [email protected]#$% AND EVEN THOUGH I KNOW THAT'S THE POINT, I STILL HATE HIM LIKE CRAZY, I MEAN WHY YOU GOTTA DO THAT TO JONATHAN YOU ABSOLUTE ^%$#HEAD. There I think I'm finished.

Everyone hates him because he is such a good villain. They really nailed him

Dio has two opinions about him; you either hate him or love him. The way I see Dio is if his dad had not been shitty and hungered for power, Dio would not have not followed the same path and would probably have been a good guy that was just arrogant and an asshole. But, I do like him as a villian. Also, Jonathan would have forgave him and would wanted us to forgive him as well and who could deny Jonathan?