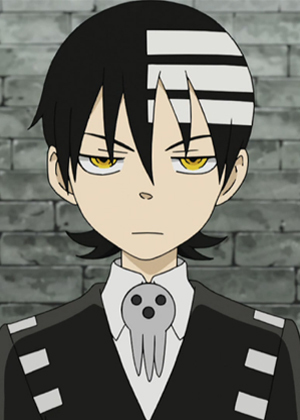 As son of the Shinigami, he attends Shibusen choice in order to raise his own pair of death scythes in Liz and Patti. While his sense of honor and duty lead him to be a devoted son, diligent investigator, and an able combatant, his defining characteristic would be his crippling obsession with symmetry. Even in the midst of heated combat, Kid will pause to worry whether the pictures on his mantle are all level and in the proper arrangement. After the demands of his compulsion, his love of his father and Shibusen are the principles which calibrate his moral compass.

I love this Kid

His Symmetry obsession is the reason why I love him. And also the fact that he holds his pistols upside down and use his pinky to shoot. Death the Kid is my fav in Soul Eater. He's cool, funny and awesome!

Omg there is so many things i love about kid. i found his obsession with symmetry funny, he is SUPER CUTE, he is so cool (skateboard and pistols). Like kid is one of my anime crushes. no regrets.

best boi, love him so much, favorite character in soul eater, and first anime crush <3

Ppl usually get "mad" at him bc he has only 3 stripes and bc of his obsession with symmetry.

But there is a reason.

If u have not read the manga, then you will not understand.

I will explain it:

The stripes have to do with him being a reaper and his father's (Lord death's) soul wavelength.

Ok so asura is also Lord Death's son, and if you haven't noticed yet, he has THREE STRIPES around his head/hair.

Kid's stripes go all the way around his head when he is lying on the ground knocked out, while battling the keshin asura.

He suddenly wakes up with the three stripes around his head, floating, with his weapons (pistols) greatly upgraded for the time being, and his soul (wavelength) is amazingly powerful, which is why you can see it (his soul) so clearly around him in this scene.

When his soul is very powerful, it results in Lord Death's mask to break/crack bc I think his soul can't handle it.

In the manga he dies but for some reason he lives in the anime (something I'm secretly happy about :))

I do not believe kid was conceous (idk if I spelled that correctly) during this time.

In the anime they did not explain all of this at all, becuase I mean, how are you SUPPOSED TO explain that? Especially (I think) by putting it in last minute like I'm pretty sure they did here.

Now to explain the reason WHY he has an obsession with symmetry:

As Excalibur explained in the anime, Lord Death pushed this idea of him being right and all of his morals being correct and him being LORD death.

He pressed this idea basically amongst everyone in the anime but the most in kid.

I am assuming as a child he pushed this upon kid.

And that is the reason kid had his obsession with symmetry m it actually isn't a medical problem, like it says in Wikepedia, it is not an obsession disorder.

It is just an obsession, like for example, my obsession with anime.

That isn't a medical issue, that's just something I like.

We learn about kid's trouble with understanding this thing about his father (Lord death)'s idea upon him when he goes to Dr. Stein (when Dr. Stein's madness is starting to spiral out of control)

And Stein (tries to) explain to him that flaws in Lord Death's belief/idea.

I don't completely agree with what Dr. Stein says (although it is true, even in our lives today, like with a government or monarchy it is true just like it is here in soul eater)

I hope my explanation helped you understand more about death the kid, my favorite character in soul eater.