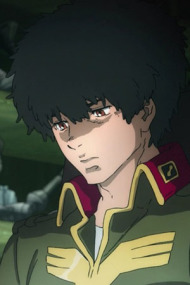 The most accurate written Soldier in fiction that I have seen in my own opinon. He has fear, anger, and ready to kill Lo, but hes actually a nice guy. From what I heard he joined the Zeon army to support his family but he gets wounded from the legs and has to go to a special group of Augmented Soldiers where they can use their limbs to help pilot the Mechs. Seeing Lo kill his allies and getting more wounded from the Gundam pilot, fueled his rage making him want to stop him. He gets to enjoy piloting the Psycho Gundam during the final battle with Lo because he felt free again with his augmented arms and legs. You can tell he does not want to drag his personal problems to his allies when they have a celebration for him and he smiled and had fun. My favorite Zeon character.