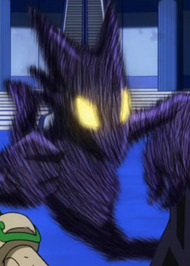 Still has more personality than half the side characters.

tbh Dark shadow is underratedly powerful asf. Like when it lost control you could see how much power it has.

Could you imagine if Dark Shadow somehow combined with Bakugo's explosion ability?? The force of those quirks would surpass even Shoto Todoroki's potential. I very much admire Tokoyami and his Dark Shadow ability, and the possibilities that their future world holds are completely unimaginable. Even alterantive posibilities that are non-canon are like that are limitless in potential. For instance if someone with the attitude and character like Bakugo had Todoroki or Tokoyami's abilities, then the entire range of these abilities would be unimagineably different.

Dark shadow isn't a character though, he's an ability xD