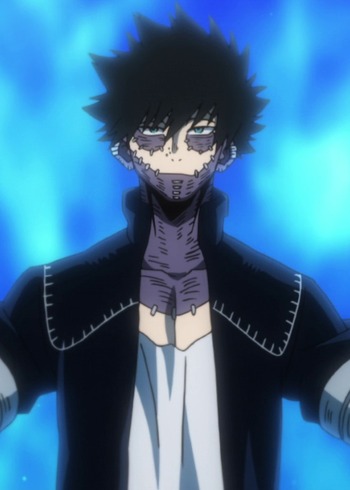 He is my fav character from BNH, I just love all things about him <3

Aesthetically, I appreciate the overall design, quirk, boots, burns, staples and all.

Backstory wise; usually villains with more potential for redeemability are more to my liking, that being said, he is intriguing.If we look past the emotional constipation and his claims of being insane and unable to cry I think we can begin to see what he will eventually turn into.I find it interesting how the blood surges from his eyes when emotional.How his mind is so jaded from being born first only to be devalued and disheartened due to his weak constitution.

I do hope in the future we get to know more about him.For example, what on earth happened between Shigaraki and him for him to call him Boss; Did Gran Torino and other characters know he was alive? How did he come across Gyran and who took care of him when he almost crispied himself to death?