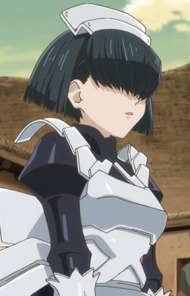 Somehow wearing a maid outfit as armor fighting monsters in an adventurer role in a fantasy setting just makes no sense whatsoever and throws the sense of fantasy a bit off pace.  If it were declared perhaps it was like an illusion or cosmetic look and her real armor was what she wore underneath, then it might almost fit and make sense.  I really wish anime would stop the cliches of clashes.  Ya know things like maid or school girl outfits somehow making sense in their nonsensical world as miltary outfits or armor for example?