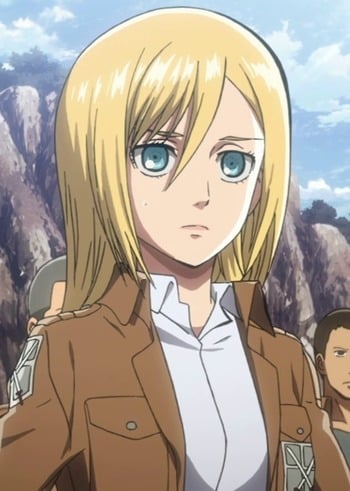 Historia is personally my best girl/waifu and I cannot stand Mikasa, but some people really take things too far.

There's something I hate about our fandom. Mikasa and Historia got treated as wh*res after it was revealed that they had a child and got married, while the farmer and jean got called a 'chad' for getting the girls. This tells a lot about our fandom...

Historia's arc was dedicated to starting to live for herself, and not to please others, which she eventually did with the help of Ymir, who taught her to live a life she could be proud of. Then she surpassed her father, which I love her for. Such a badass moment, and a turn of events. After all that, people were planning on using her to become the next beast titan, since she is the only royal blood left if we exclude Zeke. So she got pregnant to save herself, which I find it a good thing for her arc and development even though I dislike the fact that she married her childhood bully. There is no reason why she should save the people who wanted to use her once again.

That's quite why I find her pregnancy to be out of protection is good for her arc. Of course, it would have been interesting if it had more relevance for the plot, like Ymir getting reincarnated as her daughter, but I don't see how that would help out Historia's character. I still think her child symbolizes the first free-born baby after the rumbling.

For people saying she should have done something about the rumbling but stayed quiet even though knowing Eren's plan, why should she? What reason does she have to save the people who only saw her as a tool?

She is a selfish person and there is nothing wrong with that. All the characters had their selfish moments as well, and Historia being selfish is her character arc. All her life she lived to please others and know she is living for herself, she has every right to be selfish. I find selfish characters very interesting, for example, Ymir.

I wasn't saying that. I find Erehisu an okay ship, the fan arts, and stuff are very cute, I personally find them as good friends that understand each other deeply and help each other overcome their traumas, especially Eren helped her a lot after Ymir left. But some of the ehs (it might not be a majority, I don't want to generalize) I came across with only used her character as a shipping tool to support their favorite ending. There is nothing wrong with being an Erehisu, it's a cute ship and I understand why people ship it, I even have Erehisu friends even tho I don't ship it. The problem with it is that some of them used her as a trophy wife for their 'Chad' Eren, which mischaracterized her a lot.

Anyways, I love Historia, she is one of the most well-written characters out there.

Anywho, I love her because she didn't allow her father to manipulate her- even though she was tempted- and she chose to stand by Eren's side. She killed her own father- in titan form- to save everyone. Even though they wanted to keep her safe since she was the queen, she chose to endanger herself to save everyone in order to be a leader everyone respected.

She spent her arc defining herself and not allowing anyone else to do it for her.

I don't think anything reduces her to a 'breeding machine' more than shafting her to the background and making her an irrelevant bride to an npc. The reasonable EH fans were the ones hoping to see her character and her pregnacy have more relevance to the story.