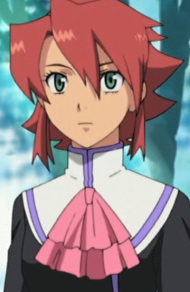 I liked her as a charecter but because of how she acted before she realised the truth I can only see her as a big sister type and not someone who the MC should romance.

Chiaia as we know, is meant to be the 'Tsundere troph character'. As all of us who watch anime know, a tsundere, as stated on the internet, "a character with a personality who is initially polarized warm/soft, cold, temperamental, hotheaded before gradually showing a warmer, friendlier side over time." In a non-serious/parody/entirely humorous animes, while the tsundere troph can be aggravating due to continuous hitting and bashing towards the main character, it can over time, become a well developed character of made relatable with memorable moments... That is, of course, if the tsundere is done right. That means having a gradual development to make the viewers and the main character of the anime to actually want to careful about the tsundere. That all centers around that tsundere character's development over the course of time. Good ways that they can be developed is: if they either move on from their aggravating tendencies to be cold and temperamental, actually show and confess actual expressions of love for a certain character instead of inflicting continuous hurt or fake bitterness, or even show to the audience how that tsundere is deep down a good person who isn't as aggravating and actually has cares... This is so that any tsundere character can become a beloved character,  rather than a mindless self absorbed and seemingly cruel character. Sometimes, even a tsundere girl's actions of being bashful can be seen as funny and cute; while still having expressions of love still present in the process.

Some examples of some well written Tsunderes are Rem and Ram of Re:Zero and Mikasa Mokoto of A Certain Magical Index. These characters were tsundere in some way, and have shown some sort of gradual development over the course of their anime series.

On the other hand, there are still horrible tsundere characters, which are characters whom are done wrong. A tsundere character who is done wrong usually makes for an aggravating troph character in an anime/manga arc, and makes many viewers of the anime wish that the character is either killed off due to immense aggravation towards him/her, or wish that the character was never written into the anime in the first place; since it is known that the presence of certain characters can hinder an anime plot rather than help it. Sometimes a tsundere done wrong can help guide a story to make the main character/hero want to avoid any sort of romantic relationship with them, but it can also hinder any anime rather than help.

Chiaia, as you may have guessed from seeing the anime, does not fit to the criteria as a "tsundere done right"... Chiaia is the perfect prime example on how not to do a tsundere character, which is a character that would be better off not being present or written into the anime as a whole. Chiaia's development does slightly shift over time, but because of how short of a series this is; her main troph involves scolding and hitting Kenshi. It starts out a little funny, but becomes aggravating over time. This is not how to turn a tsundere into a likeable character. That, in my opinion, isn't cute for a tsundere and makes me one of the many on this site who hates these types of underdeveloped troph characters. Chiaia was not a good character in Tenchi Muyo! War on Geminar. I just wish they put more development into her in this anime. Wasted character with wasted potential.

Tsundere, ill-tempered, violent, disrespectful. How can anyone fall for a piece of garbage like G-myre?