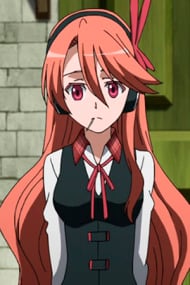 For a character with short screen time she was really good. She had a more depth than some of the main characters.

i dont undertsand why people liked her so much. she was the worst character and i hated her more than anyone in the entire show. her death was well deserved. she was a terrible character, she was annoying, selfish, and immature. Although the only reason she was killed off was because her imperial arms was OP, her death was deserved.

Her death made me cry a lot of times.

I'm so sad this girl died.. She was such a cool character and her art was so cool. They did her bogus with her death :(