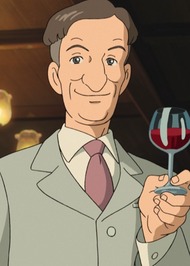 I swear, ever since this character's first dialogue with Jiro I convinced myself he was supposed to be Richard Sorge or one of his ring, until his name was dropped and I found out he's actually out of Thomas Mann's "The Magic Mountain" (which, by the way, also deals with a mountain sanatorium for tubercolosis).

My headcanon still wants him to be Sorge, though.

Why was this dude so creepy..