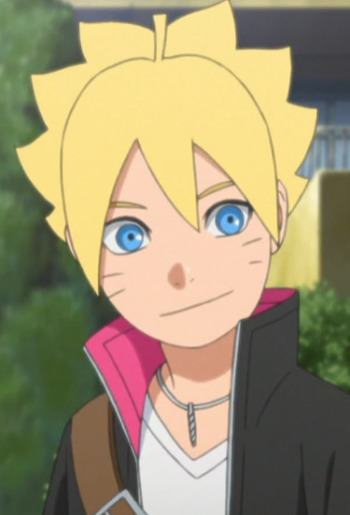 Bad character. His personality sucks, I just watch boruto to see the og characters cause the new ones...😪

lmao everyone hating boruto is funny

I find Boruto to be one of the characters of the new generation that i don´t like. He don´t understand what it means to be a true shinobi and it dosen´t seem like he is willing to but in the effort to become one either, he just want to be. He is the complete opposite from he´s father. Time to time he gives me the spoiled brat vibe but for a reason. Of course I think it can be explained. Naruto never had his parents in he´s life so now when he have a son and a daugther it wouldn´t be that strange if he wanted to shower them with love and give them everything they want. And because he´s the Hokage he can´t allways be there to watch he´s children all the time which makes him feel guilty for missing out of alot of important stuff and that can perhaps explain why he in that case shower them with gifts. In the end Boruto is a child that wants he´s father. He wants Naruto to see and appreciate him. Sure Boruto acts like he hate him but thats just not the case. But still I just don´t like him. Maybe he´s character will evovle to something I can like but for now I don´t.

He doesn't have the right to use his name.