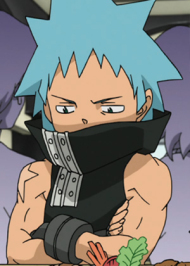 Though technically a ninja, Black Star's overflowing confidence leads him to act flamboyantly in every situation instead of using stealth. He meets any challenge head on and trains constantly in his mission to "surpass God". In addition, he is fiercely protective of all his friends, and would never abandon them. Despite the fact that his partner, Tsubaki has three different weapon forms, Black Star's true abilities lie in hand-to-hand combat where he can make use of his soul's wavelength to amplify the power of his blows.

I love Black*Star, he's one of my favorite characters in Soul Eater. Now, I get that people don't like him, but I feel like people forget a few things when it comes to this short playful ball of energy.

2) He's lonely. He acts out to get attention from others

3) He's hard on himself. He feels like he could always be doing better even though he covers it with this big ego facade.

4) He's the most socially awkward person out of the master-weapon trio (quadlet if Crona is counted).

5) He turns everything into a joke or plays it off like he meant to act stupid sometimes to cover up his insecurities and his slip ups.

Sure he can be annoying, but he's extremely smart and dedicated, and he's got hisown problems like everyone else.