Aka: God of Destruction 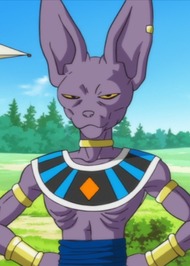 They should have kept him the way he was in battle of the gods.  Mostly calm ,mature ,  kind lazy yet genuinely loves battle and a real challenge.  mannerly but easily ticked off . In the movie he feels like if you took a cat and gave it human intelligence. In the sense of like "ok you cat pet me, but don't push it cause I'm better than you."  But in super they just made him childish like kinda like buu . Only buu is well an idiot so he gets a pass. But seriously he's supposed to be a god .

Beerus is basically a spoiled little brat. Way too much power. Arrogant as hell, but as soon as there's someone much stronger than him, he shows how much of a coward he is. "god of destruction"... very one dimensional. More like a 4 year old who runs over ants. No depth to him.

You're awesome. But please just calm down.

Destroying a planet for a pudding cup... You need to get out more Beerus😔