Aka: Fox's Sin of Greed 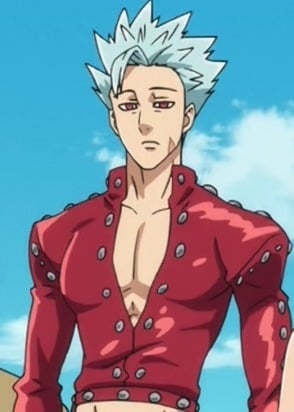 The immortal bandit Ban is a member of the Seven Deadly Sins, known as the "Fox's Sin of Greed". He spent years in prison and was executed a total of 33 times, but his immortality has made death impossible for him. He is one of the few people Meliodas can battle without reservation since there is no danger of killing him. Ban's mission in life is to find a way to revive the fairy Elaine, who died protecting him.

I'm at least surprised the amount of hate Ban gets is very low, after all, I'm impressed no one has left a hate comment on my fav in this show, seriously though, who could hate him? As much as people will hate Meliodas as well as Elizabeth, Ban gets so little hate, at least that person isn't writing hate comments and telling it to die unlike some other anime characters. But if you hate an anime character please stop telling it to die, it's so annoying. If it's a villain you could expect it to either die or even get punished regardless of how cruel it behaves.

I love him and his obsession for Elaine makes him even hotter I ship them and I don't like Jericho she's just in the way...

why are you SO HOT

He's my fav charakter. Hs attitude, his behavior, his looks, his everything. I love him <3