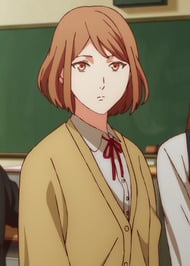 Im personally okay with her as of now. I still dont l i k e her just yet, but at least an apology was given and she isnt bothering Ue and Mafuyu.

Still dont trust her though. But i hope she s t a y s nice or she's on my hate list again effective immediately. But i just hope she doesnt try anything, i mean she did encourage Ue to visit Mafuyu so i guess she's fine f o r n o w. But seriously, what she said about Mafuyu is still a terrible thing to say about a human being even if she did apologize so she's on extremely thin ice.

Anyone who likes this girl doesn't deserve this anime's glory.

obviously i hate this girl hahaha 😂