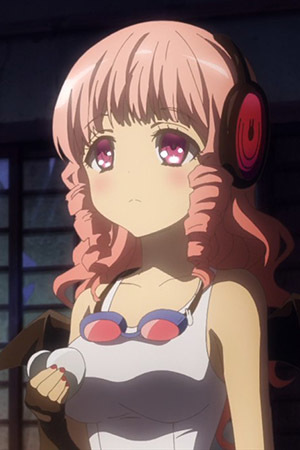 And this is what I ment when I needed to prepare for hate... don't have anything better to do at the moment so might aswell respond. Its been awile since I watched the show so I'm just going off memory.

My issue with this is that she's not some evil villian who kills becuase its fun for them, or they like killing. She kills becuase she thinks she has to (Thanks Ruler). Using the example of Tama, She only did it becuase she Tama found out Swim Swim's Alias and SOMEBODY taught Swimmy that noone is allowed to know your Identity. Swim Swim was simply acting in the most efficient matter possible as she was likely taught by Ruler, and she was already used to killing by this point. Going with another example, When she was chassing Ako ( AKA Hard Gore Alice), Swimmy could have easily hurt or killed all the students between the two Magical Girls, but didn't. Swimmy was only after Ako and didn't hurt anyone else. As for calling her Soulless, that I also disaggree with. When the magical items where introduced that you pay for with years of your life, Swimmy could have orderd her subordanates to buy everything possible and kept it all for herself. Instead, she bouht the most expensive item they had and traded it with Tama for the spear, Volintairily giving up more of her life than nessisary for the spear so that Tama could have the cloak at a reduced cost. Further more, when Fav was pushing Swimmy to become the new Master or whatever Cranberry was called as the organizer of the whole situation, Swimmy just wanted to study. She had no intrest in continuing the murder fest that was happening.

"Her age doesn't change or exuse what she's done"

I wasn't trying to say that her actions were OK because she was a child, but young kids are super impressionable, and haven't learned what is right from wrong. I'd assume you'd be a lot more patient with a young child that commits a crime (IE. steals a candy bar/kicks a puppy) because they don't know any better. You would discipline them and teach them why it's wrong, but with an adult, legal action owuld likely be taken for theft of animal abuse. The action is still wrong, but theres a certain amount of leeway we grant to children who don't know better since it's unfair to be expected to know everything as soon as your born.

"Swim Swim is a monster up with Calamity Mary, Cranberry, and Fav." + "She deserved to die."

I'm insulted you didn't add Ruler to that list. And to be honstest, I hate redemption arks, because they (in my experience) seam to be a 5 min realization and character is good, but I honstly think Swimmy could be redemable if done right, even if it was rushed. I don't think she deserved to die. Swim Swim did do some awfull things, but I truely believe she was still a good person.

What the hell do you mean you like Swim Swim?! I seriously don't understand how anyone could like that piece of shit. That piece of garbage is a murderer without a soul. She mercilously killed whoever was in her way. "Just a child" my ass! Her age doesn't change or exuse what she's done. And "Never mean to any of the people she ruled over" is BS as well. She killed Tama in cold blood. Swim Swim is a monster up with Calamity Mary, Cranberry, and Fav. She deserved to die.

I know this is an unpopular opinion, but I actually kinda like Swim Swim. I'm only on ep 11 while writing this, so something might change my mind completly, but I'm doubtfull that two episodes will do that.

I hate Ruler yes, and Swim Swim fills the role of Ruler, but I see it more as a little girl being rasied the wrong way. Swim Swim is (was?) just a little child who idolized princesses, and it just so happened that Ruler was basically a princess as a magical girl. Its only natural that Swim Swim copy Ruler's style. Swim Swim as a magical girl was basically rasied by Ruler the way I see it. I'm disappointed that she killed some of the characters I liked, but Swim Swim was never mean to any of the people she ruled over (as far as I can recal, and I'm just starting ep 11). Personally I see Swim Swim as more of a tragedy and another reason to hate Ruler.

0 sympathy for her, rot in hell bitch

Oh, I fucking detest Swim Swim, and she deserved to die, especially after she killed two of the girls I liked. Plus, Asari, did you really have to give a 7 year old girl bouncing boobies in her magical girl form?