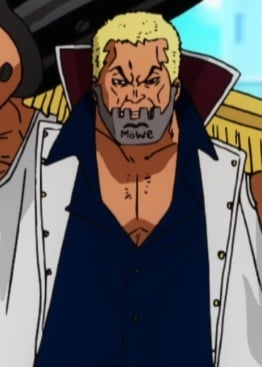 Morgan is a ruthless marine captain who is obsessed by rank. He is hungry for power and will step over, or make an example of, anyone in order to achieve it. He cares for nothing more than furthering his position, even paying little heed to his spoiled son, Helmeppo. His right hand has been replaced by a giant axe and he has a steel frame on his jaw, which only increases his intimidating presence.

He has got to be one of the worst boss villains ever! He has a combat axe for a hand but it's not much use in combat. To think he was the boss on the island Luffy got Zoro and he lost in like 1 punch, without giving much of a fight! You'd think his only way of fighting is having his men tie you to a pole to starve to death.