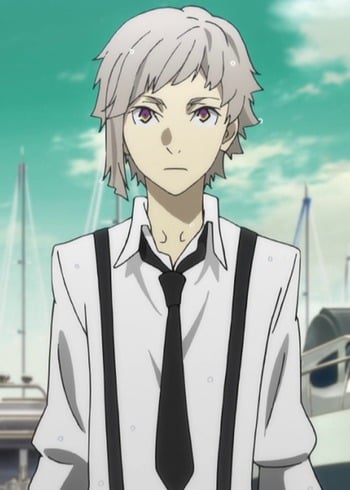 Despite how many people don't think of him as fit for the protagonist role, i think what makes him so great is that he's realistic; a child who grew up in an abuse orphanage and was living in the streets for 2 weeks, always belittled by the other ones, worrying about not having enough food- if you were to go through that, constantly reminded that you're worth nothing and that you should just die, do you really think you would have a great self-esteem?

he doubts his every move, yes, but what makes him so great is that he's trying to break out of his past; so what if it takes years? Do you really think the process takes a few episodes? If you do, please read articles about PTSD, perhaps then you won't sound so stupid.

His character development is top tier: going from someone who thinks they should just die to someone who FIGHTS in order to gain the right to live. In my opinion, despite acting like a damsel in distress (which can be very annoying at times), be is inspirational, not only because of his optimistic view that humans should save other humans but that they should also let each other know it's okay to go on living, and you have no idea how much some people need to hear that.

I love him for his flaws, strengths, and everything in between, because they make him a great protagonist, and no one is as fit for the role as he is.

Atsushi was raised in an orphanage where he was mentally and physically abused and isolated for the most part of his childhood.  Contanstly told he was worth nothing from a young age, then thrown on the streets left to fend for himself.  Sure, because of how comedic the anime can be, it is often glossed over, but atushi's lack of self-confidence is a natural thing and I believe is a realistic outcome of such an experience at a young age.  We do see that a low self esteem isn't the only product of his childhood, he suffers from nightmares, painful memories and flashbacks of what he was told as a child.  And for me, personally, I do really love his character, not only was he able to overcome his mental obstacles, but to the point where he could related to and help Kyouka to find her own "light".  He goes from "if I save this person, does that mean I have the right to live?" to "I will save this person because it is the right thing to do/I want to", he stops believing he is expendable and finally recognises his worth.  Yes, it took three seasons, but what else can be expect from a person who had grown up in such an enviroment? And it isn't just a slap in the face, one second he is sad, the next is is okay kind of development, it is gradual and natural.  He doesn't just have the traits of kindness, politness after regaining his self-esteem, he is also courageous, protective of his happiness and trusts much more in himself than he did before.

The fact that he is the embodiment of self pity is what makes him so annoying , I agree that daizai isn't fit for protagonist but ,ATUSHI , anything would be better then ATUSHI .Like c'mon i usually like guys that kinda look like rats like nezumi and that guy from fruits basket , so his hair is cool . BUT his personality is just plain shit. That's right i said it . He's a shit charatcter , and he almost made me drop the series because I simply could NOT put up with his bullshit . For THREE WHOLE SEASONS all he does is have all the traits of a stereotypical protaginist and them with the edition of self pity! Like c'mon man just stop moping . What i will say is , that in the last season he loses the element of self-pity ( his strongest and most annoying trait) and instead goes for the roll of "overly feminized uke from a yaoi " with his personality being just kindness and politeness not that he wasn't that before but STILL. Characters can be done right like that ,(one example being komugi from hunter x hunter ) but damn could they not have just made a pile of shit and called it a main character ??!!! I'm not an author or a critic but even my 20 IQ could sense the shit aura coming from atushi as a whole !I just can't anymore ... I just cant talk about his PRESENCE anymore..