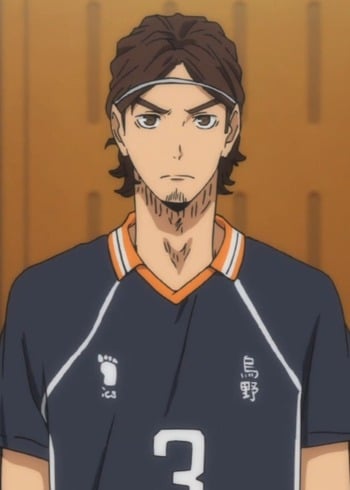 Words cannot describe how much I relate to his character. He's a truly well written character, I find his personality to be one of the most realistic.

Similar to Asahi, I struggle with self doubt and always feel pressured. I play basketball, and many times I feel like I want to run away from the game. When I was in 6th grade, I was on my school team. I did very good for the first 3 or 4 games - I was scoring between 10-16 points every game (as a point guard). Because of this, I was given high praise by my teammates, my coach, and my classmates. My teammates, many of whom were my friends, started to look to me to score points, similar to how Asahi was relied on by his teammates. When the championship games came, I hit a block, and I wasn't able to score a single point within the span of two games. My nerves piled up and I was feeling sick in the final game to the point of even getting benched because of my throat.

After both games, I felt like I had let everyone down, like I had not given it my all.

I relate to Asahi due to this, and to this day I still struggle with doubt in my abilities. Although I'm not the best player, or the worst, I still have problems with being pressured, and feel dread for times where my abilities will be put to test.

BROOO ASAHI IS SO PERFECT UGH SO HOT   😍

THIS MAN IS SO HOT and doesn't get enough recognition PERIODT