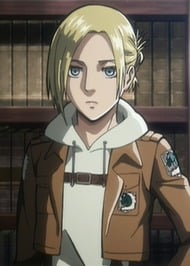 Easily one of the most badass characters in the show imao

Despite the fact that I like it, the truth is that it is difficult for me to give an opinion of this character.

Damn do people really hate her for being the female titan?

I wrote comment about her some time ago and I kinda changed my mind.

Annie isn't really a good person. Yes, she was forces to do all this stuff but her mentality was kinda messed up.As she said she dehumanizes her "victims" so she has no problem with brutally killing them. She doesn't really cared about peoole she would kill. All that matters was her mission.

But that doesn't mean she's monster at all. She was forced to training since the young age. She got a titan power being a young teen and she was fighting in other countries before being send to paradis. Dehumanizing all people she had to murder was the only option to stay sane.

Yes, Annie was selfish but what people wasn't? She had to do what she was ordered cause in other way she would get eaten by new female titan who would do the same. Also she had really no people she can trust so she only cared about herself.

I also don't think she found any joy in killing people. She was brutal but only for people that attacks her. She tried not to kill people who can't fight anymore (for example in wall Sina, she spared Mikasa while running away cause she didn't know she woukd be able to fight back later).

That's why I love Annie for being good morally grey character.

* I think I didn't write all things I had to say but I have no idea how to do it now so I propably rewrite my comment someday.*