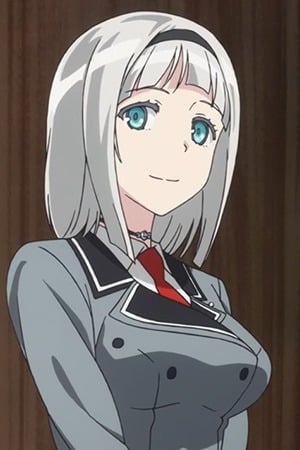 She's the reason I discovered this anime!!

this girl is nuts..very nuts :D

YEEP, one of the most WTF character i've ever seen. But now I love her, this Anime deserves a second season just for her.

Ladies and gentlemen, this is what happens when you try to raise a child in a sex-and-perversion-free environment: they end up raping their senpai. And I don't mind going on record as saying that her attempts to *ahem* "win Tanukichi's love" wouldn't be nearly as funny if A) they weren't as over-the-top as they are; or B) the genders were reversed.

Anna's appeal comes from her drastic personality split after episode 4. She goes from "innocent, well-meaning and pure-hearted" to "crusader for purity with superhuman strength/'notice-me-senpai' rapist/batshit crazy stalker." And also...

DOES ANYONE WANNA TELL ME WHY THIS CRAZY BITCH STOPS WEARING PANTIES ALL OF A SUDDEN?!?!?! Seriously, just pay attention to... certain things.

In a show that lacked any sort of complexity or depthe in plot or characters, Anna shines like a beacon. It's fascinating to see the way she reacts to things, because she is essentially a look at what would eventually happen in a sex-free society. Whether intentional or not, my hat is off to the creator of the show for giving us Anna, but I'll keep my hat on for the rest. If you do watch the show, watch it through Anna's eyes. That'll make it more interesting at least