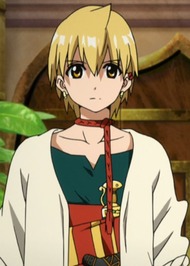 Trash character. Literally there's no reason to love him.

He's probably one of the best Shounen protagonists. Depth of character, development, emotions, weaknesses and strengths. Likewise, he is not stupid and can certainly fall back on strategy and foresight.

alibaba is a character that can bring a lot of emotions from the viewers. first i thought he was pathetic, but when he decided to help the little girl who was falling into that man-eating plant monster, my opinion improved. i was really glad that he was faking a personality and that it was not his true nature, because it'd suck a lot.

his development along the series was really thrilling and well portrayed. what i liked the most was his will to overcome the difficulties he found alongside the path that he chose to live. the first step was to be true to himself, the second one was to seek power to make his goals come true. my adventurous rpg spirit really got me there lol

he became my favourite character from the series and also a hubby material.