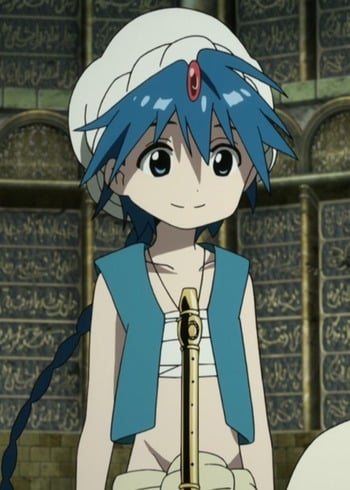 Please stop insulting people based on something as trivial or irrelevant as their opinion, it isn't hurting you, but you may be hurting them with these mean-spirited comments.
Feel free to express your opinion of fictional characters, but I notice a trend of you directly insulting users of Anime-Planet just for voicing their opinions of characters.

I’m glad that he’s no longer a pervert after the timskip in the manga.

First impression on Aladdin..."wow he's a friggin pervert...I like it!!"

Please don't hate Aladdin.. he may be all perverted in the anime but in the manga he's blossomed into A FRIGGIN HOT FLOWER AND IM NO JOKING HE HOT AND OOOOOOOO!! (died)

(what I mean is Aladdin became more mature in the manga series and I don't wanna spoil it for those who haven't read it yet. I'm quite sad because the Magi manga has come to an end ;-; I hope there will be a second season for Magi!! (i mean as season in the manga not anime))