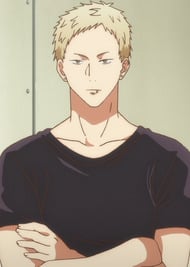 What he did was spoiled for me before I watched the Given movie so I was lead to believe that he was downright horrible... until I watched the movie and saw for myself that he isn't. Yes he almost raped haruki but then he stopped, apologized, and began to make himself a better person.

Y'all are honestly making him out to be evil and horrible when he really isn't.

Hilarious how the same girls hatin on Akihiko are the same ones that go "uwu Sangwoo is my daddy" or you put this guy from Painter of the Night on a pedestal just because he's "hot."

Sangwoo and Seungho Yoon are literal rapists, whereas Akihiko never actually raped anyone, y'all rlly need to set your priorities straight.

Essentially he was playing with their feelings for his own benefit. I don't know what to think of this guy, seriously....

Honestly I really don't know what to think about him. He was awesome at first. In the first season/part of the manga he seemed so mature and responsible. The talk he had with Ritsuka in episode 6 and the way he managed to calm him down was super cool and I really did like him for that, but I still can't completely forgive him for what he did to Haruki.

Honestly I'm really pissed at Kizu-sensei for doing that assault scene, it was completely out of character and I feel like it was completely unnecessary. Nobody liked it. I think almost all fans would be happier if Akihiko's and Haruki's relationship issues were resolved in a more gentle or happy fashion, without the assault, but still, despite that, Natsuki Kizu is a great mangaka and honestly I don't think I could ever dislike given.

At the same time, I think everyone just blindly hating on Akihiko are taking it too far. He was in a toxic relationship for so long that it messed him up, and I think he realized that himself. Even with the Haruki incident he realized midway that he fucked up and didn't take it any further. I'm absolutely in no way saying that what he did was okay, but I hope and believe that he managed to change when he made up with Ugetsu, and that him and Haruki stay on good terms.

I have mixed feelings ngl. Yes he tried to r*pe Haruki but stopped in the middle of it cuz realized that he was doing bad shit and then dropped everything and started becoming better just because of Haruki. But honestly, Absolutely hate writers for making him a bad guy out of the nowhere -_-

I can understand being upset at him for his relationship with Haruki, but between Ugetsu and him, that's mostly Ugetsu's fault lol

I like Ugetsu! I really like Ugetsu. But he's the one causing the problems in that relationship